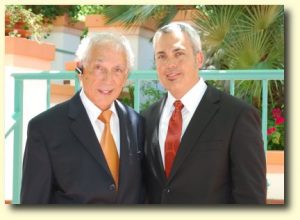 Rene and his beloved wife Miriam have three children Rene Jr., Robert and Rosanne. Rene’s spiritual journey took a major paradigm shift in 1973 as he was drawn by the Ruach HaKodesh to a Messianic Jewish Congregation in Encino California under the leadership of Dr. Hillel Goldberg. Today the congregation is called Ahavat Zion Synagogue lead by Rabbi Stuart Dauermann. In 1981 while living in Bakersfield California, Rene had a strong calling to aliyah to eretz Israel. As much as he felt the Ruach leading him back to Israel, somehow by divine providence they ended up moving to Rockville, Maryland. So true and confirming were the words from Isaiah 55 that say “For my thoughts are not your thoughts, and your ways are not my ways.” Rene really did not understand at the time, but as time progressed he saw the Lord’s hand as the Bloch family made BMC their home and shortly after Israel’s Hope was formed. Rene traveled all over the world with Paul Wilbur and Marc Chopinsky and witnessed great signs, wonders and healings as they ministered through the anointed music and the power of the Word. BMC was a time of connecting with some of the great teachers of the Messianic movement such as Dr. Dan Juster, Eitan Shishkoff, Asher Intrater and many more. In 1991 Rene was led back to the sunshine state of California and was voted in as the senior spiritual leader of Beth Shalom. He continues to lead the congregation along with his son Robert who make a powerful father and son team.

Robert’s journey parallels with his father Rene as he has taken up the mantle of his father as a second generational leader. Robert is married to his beautiful wife Yesenia along with their three adorable children Bethany, Ezra and Asher. Robert graduated from California State University San Bernardino and is completing his Masters Degree in Rabbinic Studies through the MJTI. Shortly after graduating university, Robert received his clear calling to serve the youth of Beth Shalom. He was drawn to the book Matthew chapter 5 verses 13-16 and he knew in his heart that the Lord had finally broken through and convicted him to lead the youth of Beth Shalom. Today the youth group is called Dor Segulah [Generation Treasure] and Robert continues to lead the youth and young adults along with all the many other aspects of congregational leadership.