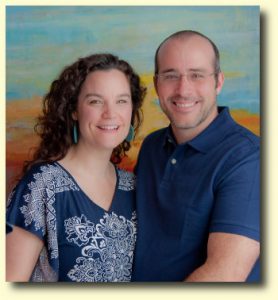 Richard Cleary was born in Calgary, Alberta, Canada. He also lived for many years in Nova Scotia, Canada. His mother was born in the United States and his father in Canada. When Richard was seventeen, his family moved to Florida to be closer to his mother’s parents. Even though he was dedicated as an infant into the Anglican Community by his parents, he did not begin following the Messiah until he was 22 years old. While in Florida, a Native American believer in Jesus who worked with Richard at a boatyard bought him his very first Bible.

It was through reading the Scriptures and encountering the Messiah through the Gospels that Richard was drawn into a covenant relationship with the God of Abraham through Yeshua. Thankfully, the Lord placed a Messianic Jewish leader and friend named Greg in Richard’s life right around the time Richard began to be discipled and became a member of Beth Judah Messianic Congregation where Greg was serving as an interim leader. Soon after Jerry Miller became the Congregational Leader of Beth Judah.

A few years after being at Beth Judah, Richard met his wife Sarah and they were married on July 3rd, 2004. After this he completed his Bachelors Degree in Business & Professional Leadership at Southeastern University. Then he went on to Reformed Theological Seminary in Orlando. There he began his Masters of Divinity Degree before transferring to The King’s University & Seminary for their Masters of Divinity with concentration in Messianic Jewish studies.

After 13 years at Beth Judah, the Lord called Richard and his family to move to Kansas City in August of 2012. Richard and Sarah had the great joy and honor of serving under and with Jerry and Jo Miller for many years, and it was very sad to leave. Richard and Sarah’s relationship with the Millers continues strong till this day.

Today Richard serves as the Lead Pastor on a strong Eldership team of gifted men that lead the Congregation together. Their leadership team considers themselves covenant friends who get to serve an incredible community of Messiah’s followers called Kingdom Living/Mamlacha Chai. Richard is continuing to pursue the completion of his M. Div. at The King’s University & Seminary.

Richard loves to spend time with his family, read books, hang out with friends, have deep conversations about the Lord, and enjoys the weekly Kingdom Living soccer games. Richard and Sarah have three kids: Luke, Hope and Zechariah.