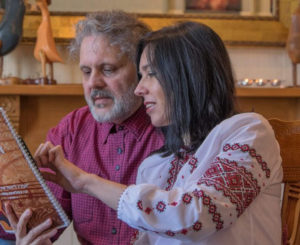 Arvids was born in January of 1962 in the city of Klaipeda in Lithuania to a mixed Lithuanian/Latvian family. He speaks Russian, in addition to his home languages. His mother always did prayed for all of her family and he knew that the Lord God existed and He is real, independently of the communistic ideology around him. But he lived his life carelessly and felt happy enough without the Lord. Sometimes he remembered Him, usually, when fallen into difficulties. But one day when he imagined how bad he would feel if he had spent all his life for himself and in old age, when he was weak, he would then say to the Lord – now I’m ready to serve You… That day he said to the Lord God “I surrender. You can use me now and forever.”  He was around 35.

Soon he found and joined a messianic Jewish congregation in Riga, Latvia. After a few months he was asked to lead the worship team which became his all time favourite occupation. He was one part of the whole worship service. He served in Latvia for more than five years, then lived and served in Ukraine for about a further four years before moving to the United Kingdom and becoming a member of Beit Ezra messianic congregation in Plymouth. He was ordained as an elder in December 2019.

Oksana was educated as a microbiologist and worked for many years in Kiev, Ukraine. Oksana also graduated from a music school in Ukraine. Now, living in Plymouth, Oksana is engaged in the household and helps her husband Arvid in the ministry. Thanks to her musical education, Oksana often makes musical arrangements of songs that Arvids selects for worship and plays in the worship team on the keyboard. Oksana loves growing flowers and to bake. Her challahs for Shabbat celebrations are just beautiful.