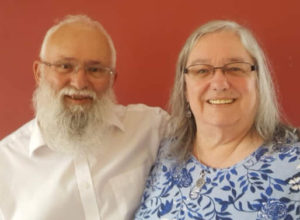 David was born during the London blitz to believing parents. Brought up in a Congregational church, he came to faith in a Methodist church, was water baptised in a Baptist church, active in the Open Brethren movement and a founder member of one of the first house churches. In the armed forces he became a backslider. He met Jennie in Scotland, married and had four children.

Jennie was brought up in Glasgow by Church of Scotland parents. She lived in an area with Italian Catholic and Jewish communities and had friends in both. At 16 she left home to work with ‘Guide Dogs for the Blind in Forfar, Angus. She turned her back on religion but still believed there was a God. She met and married David in 1967. Jennie worked as a PCB prototype technician before embarking on a nursing career working in psychiatry.

David’s career was in engineering, technically very successful, but spiritually empty. One day he prayed ‘God, I need to get back to you, but you are going to have to drag me back’ so he did!! We then joined a Brethren congregation then moved to a charismatic congregation after being baptised in the Spirit.

As a professional engineer David was asked to visit business clients in Israel. When his foot touched the tarmac in Israel he knew this was where we had to be. Arriving in Israel in 1997 on a work visa David and Jennie joined ‘Adonai Roi’, a congregation founded by Avi Mizrachi out of a coffee house ministry, where he was ordained as an elder. Jennie has a simple faith, ‘if God says it, I believe it’. She does not see herself as a theologian or an academic.

After thirteen years in Israel, and a business failure Jennie and David left Israel. Being ordained into Tikkun and after exploring several openings in the USA they moved to Plymouth UK where they started a study group that became the congregation ‘Beit Ezra Messianic’ now a registered UK charity 1177526. Following up on a local relative David found he did have orthodox Jewish antecedents!

Jennie works alongside David in Beit Ezra and is an ‘End of Life visitor’ and pastoral visitor with a Hospital chaplaincy. David is also a chaplain in Devon and Cornwall Police caring for a local station with a congregation(?) of over 400.