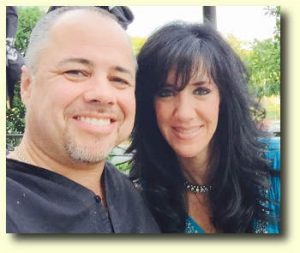 Avi and Tzofiya are the founders of the ministries of “As You Go” and are ordained through Tikkun International as Ministers of the Gospel with Tikkun America by the Tikkun America Apostolic Team. Together they serve the Tikkun America network of congregations as five-fold prophetic gift ministers, primarily imparting the Kingdom of G-d through teaching, revelation, activation and demonstration of the Prophetic, Healing and Deliverance Ministries.

Avi was raised in the Christian church but was drawn into relationship with the G-d of Abraham, Isaac and Jacob through a supernatural, open-eyed vision and infilling of the Ruach HaKodesh (Holy Spirit) in 1987. The “call” to full-time ministry, which came while attending a pentecostal campmeeting in the Fall of 1988, came to fruition in 2013.

He served in a non-denominational, charismatic, congregation in Charlotte, North Carolina for 5 years while growing his construction company. In 1992, however, the Ruach shifted his direction by revealing a 12 acre property and home named “Shiloh” some 40 minutes north near Denver, North Carolina. Here, he served in a local Presbyterian Church (PCA) and was set in as a Deacon in 2001 and, in 2004, called to Eldership.

Tzofiya was born in Philadelphia, Pennsylvania to Jewish parents. By the time that Avi met and married his “Perfect for me!” wife in 2007, Tzofiya had already experienced a two decade long history of prophetic and deliverance ministry service in both the church and Messianic worlds. Currently, Tzofiya ministers prophetically giving direction and insight personally, locally, cross-congregationally, and apostolically. As a prophetic teacher, she imparts by revelation which is often followed by personal prophetic ministry that helps bring breakthrough and revival to the Body of Messiah! It was through her invitation to a Messianic Jewish Synagogue that Avi’s eyes were opened to the Jewish roots of his faith and together the venue through which the call to full-time ministry would eventually be walked out. Together they form a bridge between the Jewish and Gentile bodies of Messiah to bring revival, restoration and mobilization.

The Ruach Ha’Kodesh led their family of then 21 (they are the parents of ten children and are expecting their 9th grandchild early 2016) to the Washington, DC area in 2010. There they served under Rabbi Ralph Finley, congregational leader of Ahavat Yeshua Messianic Congregation. For the next four years, G-d knit the family’s heart to the local community serving as Shamashim (deacons), founded the ministries of “As You Go”, and became established as Tikkun Ministries Emissaries, under the apostolic oversight our Shaliach Dan Juster of Tikkun Ministries International.

Since answering the prophetic call to return to their North Carolina home in April, 2014:
May 2014 – ordained as Ministers of the Gospel by our Shaliach Dan Juster.
December 2014 – started an intentional Tikkun Community.
January 2015 – Avi was set in as Congregational Leader / Pastor of Beth Tikkun Messianic Congregation. Congregation meeting in Pastor’s home – “Shiloh”.
March 2015 – We receive our first family into our intentional Community.
May 2015 – Beth Tikkun moved into its own, free-standing building located in Denver, NC.

Additionally, Avi and Tzofiya travel, teach and minister extensively on behalf of Tikkun Ministries to strengthen the network’s congregations and when home receive many guests from across the nation who are seeking deliverance ministry. When there are opportunities, they are joined by their children who are each strongly-gifted ministers.