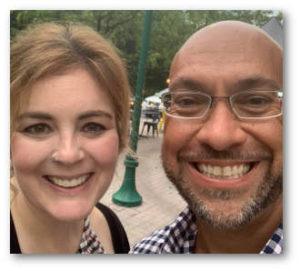 Daniel Gillespie was born to a Jewish mother of Puerto Rican descent and a Gentile father of Irish descent. He was raised in a Christian home, understanding the importance of Israel and the Jewish people and celebrating the feasts. As a child, he would dream of one day becoming a Rabbi; however, he had a hard time understanding that, since there was no mention of being Jewish until he was at a dedication of one of his cousins in his early twenties. Daniel served six years in the United States Marine Corp before transferring to the Army, where he was deployed with Special Ops to Iraq as part of Operation Iraqi Freedom in 2004. After the service, Daniel decided to focus on his education. He received his undergraduate degree from Liberty University, his law degree from Regent University School of Law, and his Masters of Law in Trial Advocacy from Temple University. He also attended two different seminaries: Liberty University seminary and Messianic Life Institute under Rabbi Michael Rudolph. It was during his time at Regent that Daniel began more fully understanding the significance of Messianic Judaism and how that was suppose to look in his life; which eventually led him to Shomair Yisrael where he would meet his future wife, Berelyn.

Berelyn was born to two Jewish parents and was raised in a conservative Jewish home. When she was about two, her parents attended a Yom Kippur service at Ohev Yisrael Messianic Synagogue and remained there through most of her childhood. Berelyn was immersed in the Mikvah (8 years after her parents) before making aliyah with her family and living in Hertzilya, Israel, for a season. Her family eventually moved to Knoxville, TN where Congregation Shomair Yisrael was birthed and led by her father, Rabbi Michael Weiner. Berelyn struggled a bit with acceptance and where she fitted in, trying to find her place in the Jewish community. At age 20, Berelyn joined the United States Army and served actively for four years, stationed in Germany and Fort Hood, TX where she was deployed to Iraq with 4th Infantry Division to be apart of Operation Iraqi Freedom in 2003. Throughout her military service, the Lord would show Himself to her in different ways, reminding her He was there and He had prepared for her to be there too. Eventually, Berelyn learned that her Jewish identity was a key element to her calling and that it wasn’t decreased because of her faith in Yeshua but magnified even more so because of that faith. Berelyn attended Liberty University in Cleveland, TN in hopes to receive her BS in Biblical Studies, with a minor in Psychology but has mostly spent her time caring for their daughter, Rebekah.

In their winding journey Daniel, Berelyn and Rebekah have served in several different capacities within the Messianic Jewish community. Daniel served as the assistant congregational leader at Shomair Yisrael, helped develop and start a messianic fellowship group in Denver, NC and served in a few different capacities at Brit Hadasha in Memphis, TN for a short season. Throughout it all, the L-rd has continued to mold and develop their family, as individuals and as a whole, stretching and reshaping their gifts and hearts in preparation to serve the Baltimore area.