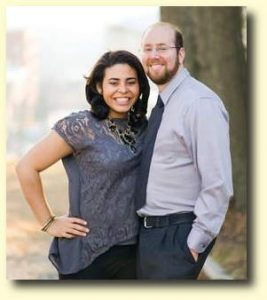 Rabbi and Rebbetzin of Tikvat Israel

David Wein grew up as a reform Jew here in Richmond, VA and came to follow Yeshua the Messiah in college at Wesleyan University. Getting a Bachelor’s in Spanish and French literature, he decided to join Teach for America and teach Spanish in Mississippi for three years. He would visit Tikvat Israel during his breaks from college and teaching, and immediately felt at home in a place that combined everything he grew up with along with everything he believed.

Much to his mother’s delight, he moved back to Richmond and continued teaching Spanish for ten years, and began attending Tikvat regularly. In 2015 he became the happiest man and married his bride, Sonya. A few months later, he joined the staff of Tikvat and started working in part-time ministry as the Rabbi-in-training under the mentorship of Rabbi David Rudolph. He also started taking classes at the Messianic Jewish Theological Institute and is currently pursuing smicha (ordination) with the Union of Messianic Jewish Congregations to become a bona fide Rabbi. He has recently been ordained Associate Rabbi of Tikvat Israel by Tikkun America.

He loves talking about Torah and theological narrative, coming alongside others in their walk with Hashem, spending quality time with his beautiful wife, writing and playing music on the piano, making up words, going to coffee shops, learning and teaching languages, making friends, walking around the downtown areas of various cities and towns, and making people laugh. He has no children (yet), and he has no pets, but he does have a CD and a gym membership.