Rolando and Circe Corte and family 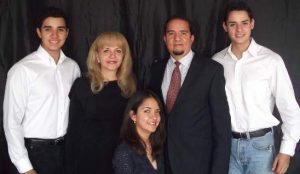 A fourth generation Mexican Jew, Rolando became a believer in Messiah Yeshua when he was 14 years old, and after some years working with evangelistic projects in the Methodist church started attending a charismatic church. After marrying his lovely wife Circe, they attended Bible College with Christ for the Nations International in Dallas, TX, graduating in 1986. They returned home to become leaders serving in their church for 14 years.

While at CFNI they received a prophectic word that they must take up their Jewish roots and hear the calling from HaShem. They started working visiting different congregations to teach about praise, worship and dance and during a Dance Seminar in Toluca Estado de Mexico, at which Rolando was one of the speakers, the organizers asked him to Spanish-translate a conference of Messianic Rabbi Ted Simon who mentored him and prepared him to be a Messianic Rabbi.

Since then, Rolando has translated many of Dan Juster’s books into Spanish, as well as “Becoming One”. He has also written a number of books in Spanish about the Hebrew language and Messianic Jewish liturgy and practice.

Since 1995, Rolando and his family have been working to start a Messianic Jewish congregation in Puebla, Mexico. Synagoga El Shaddai is named after the Tikkun congregation in Frederick, MD, due to the help and advise given by Rabbi Ted Simon when he was the leader there. John Glueck has been providing covering since 2009.

Synagoga El Shaddai meet in a shopping centre in downtown Puebla but are praying for their own building for evangelistic outreach, a Messianic synagogue and a food-bank.