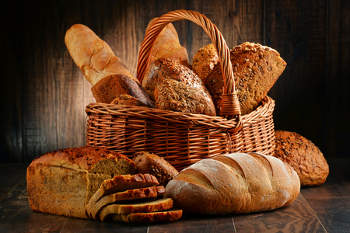 Matthew 5:6 Blessed are those who hunger and thirst for righteousness, for they shall be satisfied.

Yeshua spoke these words as part of His Sermon on the Mount. Have you been following what He has been saying? Yeshua’s words are turning the world upside down. First, each of the Beatitudes begins with the Greek word, makarios (phonetic spelling: mak-ar’-ee-os), meaning happy or blessed. The Hebrew equivalent is Ashre (connected to the tribe Asher), meaning joyful, exuberant. Yeshua is saying that people who do certain things will shriek for joy.

And, what are these “things?” They are counterintuitive. The first four are, be poor in spirit, mourn, be meek, and today we add, thirst for righteousness. The world’s system of “getting ahead” cries out for the opposite. The world says, “Put yourself in front, be proud, shout your successes, push yourself and strive.” Yeshua is saying exactly the opposite.

In our verse for today, we find the message of communion (you should already know how important communion is to us). Righteousness is found in the body and blood of Yeshua. Yeshua spoke about His body and blood, saying … John 6:47-48,54-55 Amen, amen I tell you, he who believes has eternal life. I am the bread of life … He who eats My flesh and drinks My blood has eternal life, and I will raise him up on the last day. For My flesh is real food and My blood is real drink.

Read the entire context of John 6. Yeshua is touching a nerve, and He knows it. At the end of it all, He even asks His disciples … John 6:61 But Yeshua knew His disciples were murmuring, so He said to them, “Does this offend you?” Yeshua knew it would be offensive to Jews to be instructed to eat human flesh (not kosher) and drink human blood (also not kosher). Of course, it requires the Holy Spirit to give understanding. But those who were stiff-necked would not receive. John 6:66 From this time, many of His disciples left and quit walking with Him.

Yeshua turned to ask even His closest disciples … John 6:67-68 So Yeshua said to the Twelve, “You don’t want to leave also, do you?” But Simon Peter replied … Simon Peter answered Him, “Lord, to whom shall we go? You have the words of eternal life!

So, Yeshua is asking each of us today, “You don’t want to leave also, do you?” May each of us answer as Simon Peter and affirm Yeshua as both our Lord and Savior.