Summer is here again! The kids are once more finishing school and getting ready for the “Big Vacation” as it is called. My granddaughter, Lia, graduated from high school (Didn’t we just pick her up from first grade last week?) and she is looking forward to entering the army towards the end of August.

High school graduation speeches always emphasize the passage of life: one chapter has closed and a new one is beginning. For the kids, the long school years seemed like they would never end and then on Graduation Day, they are amazed at how fast it went by. Life seems to hurtle forward at a dizzying pace while it goes slowly from one day to the next. 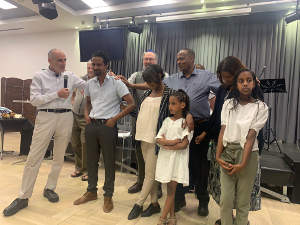 June 15th was the 3rd anniversary of Eddie’s passing into eternity. For the last few months, I had been feeling strongly that we were entering a new season as a congregational community. With the recent ordination of Yonas as an elder, I felt as if the “old had gone and the new had come.”

As I thought about that, I realized that this summer was the beginning of the 8th year since Eddie’s first diagnosis of brain cancer, which is in fact the number of “new beginnings.” We had passed through the difficult Corona pandemic which began just several months after the years of upheaval of Eddie’s sickness and death, and now, finally, we were starting to experience some stability.

Since I began to participate in the weekly congregational operational meetings this spring, I have witnessed the growth and maturity of the young leadership team. I have been very impressed with their teachable hearts and how they esteem one another and the sacrifices they are willing to make for the good of the congregation. I saw wonderful fruit coming forth in so many areas. There was more excitement in the air than complaints!

I joyfully realized that Eddie had indeed left a legacy of love for one another, care for the sheep and passion for the Body of Messiah which was deeply embedded in the foundation of our congregation. 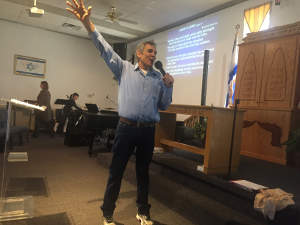 I could see his amazing heart of love being reproduced, not only in the leadership but in the congregants as well. We were truly representing our name: “Ahavat Yeshua” which in English means the “Love of Yeshua”. I could see Eddie smiling from heaven as a proud father.

We currently have two engaged couples and just had a birth! And most wonderfully of all, we recently immersed a young sabra who had come to faith in our midst. I had recognized something special in him and as a confirmation, he told me in a very loving way that he had felt a deep calling from the Lord since the beginning. May he be a first fruit of the harvest to come. We will yet see amazing things as God arranges the pieces for this next chapter!

The light grows brighter and is exciting while the world becomes more unstable as it grows darker. The Israeli political coalition that started with so much anticipation one year ago has now collapsed and Israel is once again going for new elections. Short of a miracle, there is no evidence that any one party will succeed in getting the needed majority. No doubt there will be a frenzy of activity as new alliances are forged trying to get enough mandates to form a government. According to a previous agreement, Yair Lapid will be the interim Prime Minister until elections in October.

The confrontation with Iran continues to heat up. In a rare move, the Israeli government advised all those who went to Turkey for vacation to return home as soon as they could or to stay in their hotel rooms because of the high threat of terror attacks being planned by Iranians mostly in Istanbul. Working closely with Turkish security, the Israeli secret service has been able to uncover and stop many potential incidences.

The violence in the country has risen dramatically with daily reports of murders and shootings between Arab and Jew, crime gangs and domestic issues. Perhaps the most difficult to absorb is the recent violent attacks by disgruntled family members in the hospitals and against doctors who are working sacrificially to save lives.

Teachers are on strike, inflation is rising, housing prices are out of control and reaching a critical mass as so many are being forced out of the market.

And yet by divine design, the sun comes up every morning and clouds give way to bright clear skies. And we remember that wonderful exhortation from Philippians 4:8 …

May his peace that surpasses all understanding fill us anew and afresh as we fix our gaze on the King of Kings and Messiah, Yeshua and not on the things of this world. I pray that His light will grow brighter in us no matter what is happening, so that we can face each day with hope and courage and rejoice that we have been entrusted by God to bring forth His Kingdom on this earth.

Thank you always for your continuing support and encouragement.

With love from Zion,