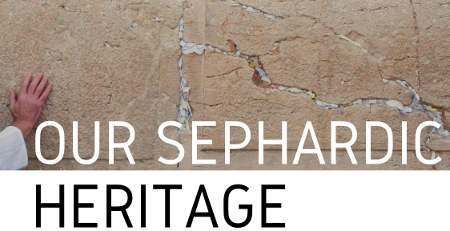 The Jewish cultural expression of most of our Tikkun America congregations is Ashkenaz in expression – that is, culture derived from Jews who lived in the region along the Rhine that is now Germany. Nevertheless, God has blessed many of our congregations with a goodly number of Hispanic members, some of whom have recently discovered that they are Jews.

These folks’ historic Jewish culture was not Ashkenazim, but rather Sephardic.

You don’t find this kind of discovery – that you are a Jew – as often among the Ashkenazim, because their history does not include a period where they hid their Jewish identity for self-preservation. But, many of the Sephardim of Spain and Portugal hid their Jewish identities during the Middle Ages, and often so deeply that today (some six hundred years later) many Hispanics in the western hemisphere are only now  discovering that they are in fact Jewish.

Much of Jewish History goes back to the area in and around Jerusalem. When the Jews were expelled from there shortly after 70 C.E. (and even before that), they dispersed to where they were more tolerated or less persecuted. This led to a complicated pattern of migration. A large number of Jews ended up on the Iberian Peninsula in what is now Spain and Portugal, and a smaller but significant number settled in a region along the Rhine (Ashkenaz) River which may broadly be said to be modern Germany. These Ashkenazim eventually spread out to other parts of the continent, so today, Ashkenazim are considered Jews whose Jewish cultural expression derives from Eastern Europe.