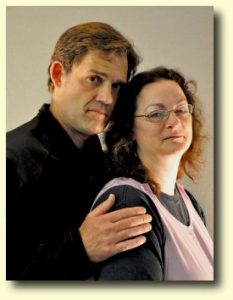 Swedish Covenant Church Pastor’s son Peter Lundgren married a nice Jewish girl, Debra Dacks, over the spring break in their sophomore year of college (1981). This began the journey into Messianic Judaism. After earning degrees from the University of North Dakota (B.F.A. in Visual Art – metalsmithing/sculpture and B.A. in English for Peter, B.A. in English and Latin – with a Geology minor and teaching certification for Deb), the Lundgrens moved to NY for Peter to earn his M.F.A. in Gold and Silversmithing from SUNY New Paltz and Deb an M.A. in English and certification in Special Education.

During this time a new Messianic congregation formed in Kingston, NY. The Lundgrens began attending three months after it began. Both served in leadership capacities from the early years, Peter leading a home group and serving as treasurer before being set in as an elder in 1995, Deb as Worship Leader and Shabbat School Superintendent. They assumed primary leadership of the congregation when the founding couple, Eddie and Jackie Santoro, made Aliyah in 1996. The Lundgrens have been very active in the local Jewish community. Peter has studied under Jacob Neusner. Deb has participated in choral groups at local synagogues.

Their primary focus in congregational life is discipleship. As part of this they lead ministries focusing on youth and young adults in the congregation. Their two children, Noah and Silvie, actively participate in all aspects of congregational life and interactions with the local Jewish community. Peter also works as caretaker on a farm property, keeps bees and chickens, gardens and sells his produce to local stores and restaurants, hunts, and tries to find time to do art and write poetry. Deb home schools their children and actively participates in the home schooling of others, serves as the congregational Administrative Assistant in addition to teaching and overseeing Shabbat School and leading worship and Kavanah, plays bassoon in a home school orchestra, and tries not to overfill her schedule all the time.