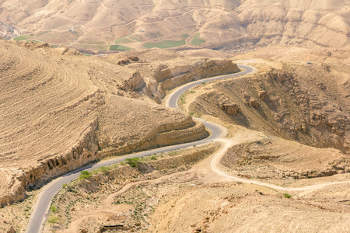 Rabbi Trail: Today is March 8th. How appropriate to begin with this verse, whose message is “march forth Abram.” End RT.

The first words of God to Abraham included the promise of land. This promise was repeated to Abraham’s son Isaac.

Genesis 26:2-3 Then Adonai appeared to him and said, “Do not go down to Egypt. Dwell in the land about which I tell you. Live as an outsider in this land and I will be with you and bless you – for to you and to your seed I give all these lands – and I will confirm my pledge that I swore to Abraham your father.

Then, the promise of land was confirmed as God repeated it to Isaac’s son Jacob (who became Israel). This promise was spoken by Adonai, Whom Jacob saw in a dream standing at the top of a ladder.

Genesis 28:14-15 Your seed will be as the dust of the land, and you will burst forth to the west and to the east and to the north and to the south. And in you all the families of the earth will be blessed – and in your seed. Behold, I am with you, and I will watch over you wherever you go, and I will bring you back to this land, for I will not forsake you until I have done what I promised you.

There you have it, three generations that received the same promise of the same land from the same God. As the title of Eitan Shishkoff’s first book clearly states, “What About Us?” Galatians 3:29 And if you belong to Messiah, then you are Abraham’s seed – heirs according to the promise.

Is that it? Is that all you’ve got, Rabbi? Where’s the connecting link? There are thirty-five hundred years between Abraham and us. Is there more evidence of land being a part of the covenant? Yes, there is plenty of Scriptural evidence. Let me pick just three from among many. 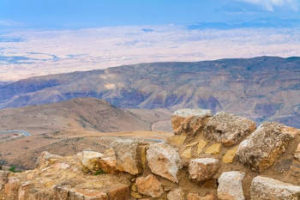 Moses received the same promise. Immediately after the two verses that form the backbone of the Passover Seder, we read this … Exodus 6:8 So I will bring you into the land that I swore to give to Abraham, to Isaac and to Jacob, and give it to you as an inheritance. I am Adonai.

Joshua also received the promise, and is quoted below, passing it along, even to those who wished to stay on the other side of the Jordan River. He tells the Reubenites, Gadites and the half-tribe of Manasseh that they will still have to go with the rest of the children of Israel fight for it. Joshua 1:13 Remember the word that Moses the servant of Adonai commanded you saying: ‘Adonai your God has given you rest, and has assigned to you this land.’

Finally, the prophet Amos ties the promise of land to modern times. Amos 9:14-15 “Yes, I will restore the captivity of My people Israel. They will rebuild desolated cities and dwell in them. They will plant vineyards and drink their wine. They will also make gardens and eat their fruit. Yes, I will plant them on their land, and they will never again be plucked up out of their land that I have given to them.” Adonai, your God, has said it.

What you just read is a good foundation. God’s promise of physical land is clearly established. But for every physical reality there is a greater spiritual reality. But what is the spiritual reality of the promised land? Nothing less than New Jerusalem.

Revelation 21:1-3 Then I saw a new heaven and a new earth; for the first heaven and the first earth had passed away, and the sea was no more. I also saw the holy city – the New Jerusalem – coming down out of heaven from God, prepared as a bride adorned for her husband. I also heard a loud voice from the throne, saying, “Behold, the dwelling of God is among men, and He shall tabernacle among them. They shall be His people, and God Himself shall be among them and be their God.”

But wait, that’s a giant leap from the physical to the spiritual. What connects them? Now, that’s a good question, and the answer is the name, Yeshua. Joseph (who was betrothed to Mary) received this word from the Lord … Matthew 1:21 She (Mary) will give birth to a son; and you shall call His name Yeshua, for He will save His people from their sins.

All the prophets told the same story. The righteousness of the nation must come, but it will only come through Messiah Yeshua. Ezekiel 14:11 so that the house of Israel will not wander again from Me or defile themselves again with all their transgressions. They will be My people and I will be their God. It is a declaration of Adonai.

Today, the people are back in the land. Zechariah 8:7-8 Thus says Adonai-Tzva’ot, ‘Behold, I will save My people from the land of the east and from the land of the west. I will bring them back and they will live in the midst of Jerusalem. They will be My people and I will be their God, in truth and righteousness.’ We are back in the land, but not fully returned to God.

When the eyes of Israel are opened, the prophesy will be complete. Job saw it … Job 19:27 I myself will see Him with my own eyes, I and not a stranger. My heart grows weak within me. Paul prayed for it, as he wrote to the Ephesians … Ephesians 1:16-18 I never stop giving thanks for you as I mention you in my prayers – that the God of our Lord Yeshua the Messiah, our glorious Father, may give you spiritual wisdom and revelation in knowing Him. I pray that the eyes of your heart may be enlightened, so that you may know what is the hope of His calling, what is the richness of His glorious inheritance in the kedoshim.

Let’s make this our prayer for all the children of Israel. Psalm 95:7 For He is our God, and we are the people of His pasture, the flock of His hand. Today, if you hear His voice. May Israel hear the voice of God calling us back, not only to the land, but more importantly to our covenant with Him. Romans 11:12,15 Now if their transgression leads to riches for the world, and their loss riches for the Gentiles, then how much more their fullness! … For if their rejection leads to the reconciliation of the world, what will their acceptance be but life from the dead? Worldwide revival is our shared destiny. We’re all on the road to Jerusalem.