No Declarations without Demonstration Paul Wilbur 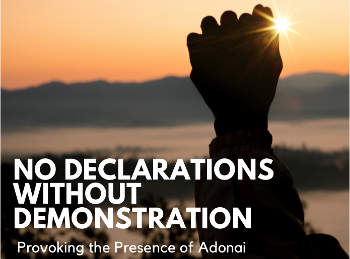 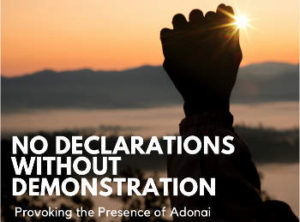 “No more declarations without a demonstration!”

It was one of those moments when you know that Heaven is speaking, and you are not quite sure what to do with what you have just heard. Sometimes, in a prophetic moment, you know it is to be shared publicly, even as a ‘word’ from the Holy Spirit to correct, reprove, encourage or train in righteousness (2 Timothy 3:16-17), but this came so loudly and with such force that I actually took it as a word of correction to me directly.

Then I remembered what Yeshua said in John 10 and again in John 14. Basically He said, if you don’t believe the words I am speaking, then believe because of the works you see Me do. The works Yeshua did on behalf of the poor and needy were done to alleviate pain and suffering for sure, but they were also signs to declare that He was indeed the Messiah, the Holy One of Israel.